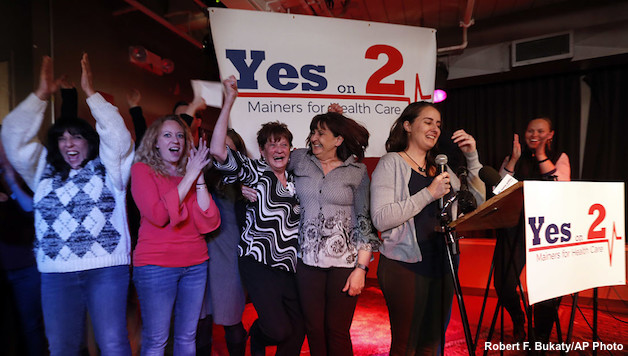 On November 7 Maine voters approved a ballot measure to expand Medicaid health care coverage. About 268,000 people currently receive Medicaid in Maine, called MaineCare. It is estimated 70-80,000 more people will be eligible for coverage. The ballot measure passed overwhelmingly by 20 percentage points, and is seen as a rebuke to both President Trump and Maine’s right-wing Governor Paul LePage.

This vote clearly shows the popular opposition to Trump and LePage’s attacks on health care. And it shows that a popular campaign can challenge a right-wing government. But there are still several obstacles toward making sure the ballot initiative is actually implemented.

Voter turnout on November 7 was higher than expected across Maine, driven by the referendum question. “Maine Question 2” or the “Medicaid Expansion Initiative” was initiated through the collection of signatures. Since Maine Question 2 is now state law and concerns a program which is federally regulated for participating states, either the governor or the state legislature must now find a way to implement Medicaid expansion.

The passing of the referendum makes Maine the only state of the 33 which have expanded Medicaid under the Affordable Care Act to have done so by a referendum instead of by an act of the governor or state legislature. In 19 states, including Maine, right-wing governors or state legislatures have refused to expand Medicaid. Activists in Maine only resorted to a referendum due to the multiple vetoes by Governor LePage.

According to the Portland Press Herald, support for the measure appeared strongest along the Maine coast and in southern Maine, a traditionally liberal area. But it’s noteworthy that areas in more conservative northern Maine and towns along the Canadian border approved the measure as well.

Medicaid provides health coverage to low income people and people with disabilities. Under this program, states set eligibility requirements and the federal government provides matching funds. As of 2017 Medicaid provided free health care to 74 million low income and disabled in the U.S.

The Affordable Care Act, or “Obamacare,” was signed into law in 2010 and came into effect in 2013. Obamacare is still a market-based plan that doesn’t question the parasitic role of the health insurance companies and other big health care corporations. But one positive aspect of Obamacare is that it provides for the expansion of Medicaid to cover all individuals making up to 138% of the federal poverty level for low income people.

However, a 2012 Supreme Court ruling in the National Federation of Independent Businesses v. Sebelius case in effect made Medicaid expansion optional for states. This gave LePage the power to veto the Medicaid expansion, which he did five times prior to the referendum.

The Fight’s Not Over Yet

Despite the overwhelming vote for Medicaid expansion, implementing the initiative won’t be straightforward. According to Ballotpedia, the Maine Department of Health and Human Services must now present a plan to the US Department of Health and Human Services within 90 days of the measure taking effect. If the initiative requires spending beyond available state funds and does not provide a means of further funding the date of implementation can be delayed 45 days into the next legislative session.

In this context Governor LePage’s staunch opposition to the Medicaid expansion still serves as an obstacle. LePage has strongly supported Trump’s and the Republicans’ efforts to overturn Obamacare. The Portland Press Herald  described how LePage, immediately after the initiative passed, said he would refuse to implement it, claiming credit agencies are predicting a disaster for Maine’s state budget, and was quoted in Business Insider as saying Medicaid expansion would cost over $100 million a year. The same article, however, refutes LePages claims, saying that under the ACA, the federal government would reimburse Maine for 90 percent of insuring people covered under the Medicaid expansion. According to estimated costs, Maine would have to spend about $54 million annually to receive $525 million a year in matching federal funds, contradicting  LePage’s claims.

We Voted for It, Now Implement It!

Ultimately, the biggest obstacle to implementing the Medicaid expansion is not the difficulty in finding the funding, but in countering LePage’s obstruction. David Farmer, an activist with Mainers for Healthcare was quoted in WCSH6 rightly insisting: “the money is there. This is not rocket science.” According to the WCSH6 article, “Either the legislature comes up with the money in a way that will please governor LePage, or they vote to override him. Either way the Medicaid expansion becomes law 45 days after the legislature reconvenes.” Farmer also added: “And if he fails to implement the law once it takes effect, we will sue him.” The Washington Post concurs with Farmer’s assessment, saying, “once a state elects to participate in the Medicaid program… that state is legally bound to comply with federal law.”

But rather than rely on corporate politicians and the courts, who are not representatives of working people’s interests, it is important to build a movement throughout Maine and the U.S. for health care. Despite the legal imperative to implement the Medicaid expansion, LePage can still move to stifle things as much as possible. Maine Senate Democratic leader Troy Jackson, a supporter of the measure, made this clear when he said that LePage “has the power to put up roadblocks to prevent implementation of the voter-approved Medicaid expansion referendum, and I have no reason to believe he won’t continue to do as he’s always done.”

This is setting the stage, not for a smooth implementation of the Medicaid expansion, but for a major legal battle this winter, which could reverberate throughout the U.S., if LePage works to block Medicaid expansion. The Maine state government has already been shut down last month in a battle over the budget between the governor and the legislature. It is very uncertain what would happen with the Medicaid expansion law when the Legislature reconvenes in January. First of all, the Legislature will have to take steps to make Medicaid expansion fit within existing state guidelines, as well as provide funding for it. This could be though standalone legislation or through a supplemental budget bill to adjust state spending. Any legislative amending of the ballot-box law is certain to be vetoed by LePage and would it require a two-thirds support to override this. Without this it appears the ballot approved measure will remain law but would face delayed implementation.

In addition to the statewide attacks from Governor LePage, the Medicaid expansion is also threatened by the nationwide attacks on healthcare in the form of Trump’s attempts to repeal the ACA. If the ACA is repealed, the Medicaid expansion goes with it. If the measure gets stuck in a long, drawn-out legal battle, it could be null and void by the time the legal battle is resolved.

Regardless of how things go, this vote has shown that the right-wing attacks on healthcare have no mandate. And it has showed how we can fight back. There are similar movements to expand Medicaid through ballot initiatives in Idaho and Alaska, and we can build similar movements throughout the 19 states that rejected the Medicaid expansion. This should be part of a nationwide campaign to fight for statewide single-payer as a step towards Medicare for All nationally. We need a system that provides health care for all people, not for corporate profit