After leaving Share I “felt the need for closure”, in pyschobabble jargon. I had to get it out of my system. For what its worth I wanted to smash the myth of a “progressive company fundraising for non-profits”. Of course I realize many, maybe most other work places in the US today are in a similar situation; a two (or three) tier wage system, a national union which crushes democracy in the local to help impose horrible contracts, work speed ups, abusive working conditions. From what I hear this is everywhere now. Share is just a microcosm.


Since leaving the Share Group after some snafus and bureaucratic tangles I got on unemployment, taught ESL and business English part time at a nearby adult ed center (a huge amount of fun) and had several temp jobs.

After I left Share has gone from bad to worse. Much worse. A few of my former co-workers I’ve bumped into, who were much more enthusiastic about the job than I was, told me the job had now become “hellacious”. There was an intense work speed up. There was very severe discipline with people being fired left and right. After I was fired one of my friend, Nabanita, surprisingly became something of a union activist. The long delayed union elections were finally held. This happened after the firings had begun, probably by design. 17 people had been fired by the time the union elections were finally held. My friend ran for head of the union on a militant platform. Nabanita is very outgoing, much more so than I. She probably would have won the election. Two days before the election though she was abruptly fired. No reason was given. When she came in the next day to ask the current call center director, now a rather viscous Neanderthal character named Don Leif, for an explanation, he yelled at her, ordering her to “get the f__ out of my office”. Two weeks after this another union militant, one of the best callers there, was also abruptly fired. The same group of pro-management people who ran the union before are now back in charge of the union.
The work speed up continued, working conditions have gotten much worse. About half the employees have either been fired or quit within the past three months.

A microcosm of what’s being imposed on the American working class. This is happening in a company which is basically an adjunct of the Democratic Party.  Its not difficult to draw some interesting conclusions. 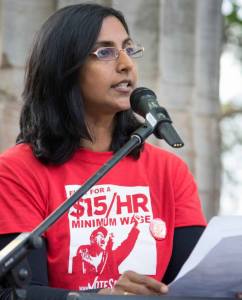