CeCe McDonald; A Victim of Racism and Transphobia

An article I wrote about the CeCe McDonald case. CeCe was released from prison January of 2014  after much protest and public outrage. 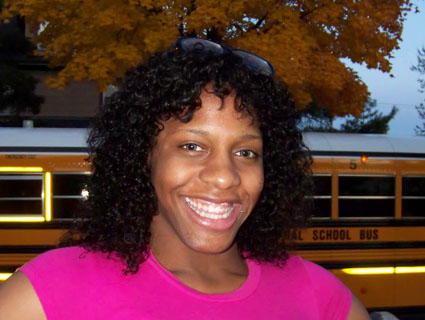 The case of Chrishaun CeCe McDonald, a 23-year-old African-American transgender woman who was attacked outside a bar in South Minneapolis, highlights both the abuse experienced as a way of life by many trans people and the all-too-prevalent official neglect they experience.

On June 5, 2011 CeCe, then a student studying fashion design at Minneapolis Community and Technical College, was walking to a grocery store with a group of LGBT African-American friends around 12:30 AM. As they passed a bar, the Schooner Tavern, they were spotted by a group of four older white bar patrons that appears to have been a group of white supremacists. This group included Dean Schmitz and Molly Flaherty. The group began hurling vicious racist and homophobic abuse at CeCe and her friends. CeCe approached them and told them that her group would not accept hate speech. Molly Flaherty said, I’ll take you bitches on and smashed a beer glass into CeCe’s face. She punctured CeCe’s cheek all the way though, lacerating her salivary gland.

CeCe said she tried to escape from the scene to get help for her injury and made it to a nearby intersection. Schmitz chased after her, and CeCe took scissors out of her purse to defend herself. CeCe claimed that Schmitz pulled CeCe towards himself. In the fight that followed, Schmitz (the attacker) ended up with the scissor in his chest. He later died from his wounds in the hospital.

When the police arrived, CeCe was the only person arrested, charged with two counts of second-degree murder. She was subsequently subjected to abusive treatment while in police custody. She was briefly taken to the hospital where she received 11 stitches in her cheek. She was left alone for hours and then interrogated. CeCe had to wait almost two months in prison for further medical treatment, during which time her cheek swelled into an extremely painful lump, creating headaches and pressure on her left eye and ear. CeCe was bailed out in October of 2011 on conditional release but was rearrested for an alleged violation of parole. Molly Flaherty, the woman who first assaulted CeCe, was not arrested or charged with anything.

In the period after this incident, CeCe’s friends experienced homophobic and racist harassment on the street from people who were at the bar the night of the fight. In one incident Cece’s friends attempted to wave down a passing police car for assistance, and the police officer refused to help them.

During the time of the trial it was revealed that Dean Schmitz had a swastika tattoo on his chest, and he and his friends are believed by many to have been white supremacists. Nonetheless, issues of racial or gender identity discrimination were not accepted as mitigating factors by the prosecution in this case. According to Brianne Bilyeu in the blog Biodork, two Minneapolis City council members urged the Hennepin County prosecuting attorney, Micheal Freeman, to take into account the fact that the assault on CeCe and her friends was a hate crime. Freeman, however, stated his refusal, saying that McDonald’s gender, race, sexual orientation, and class would not be considerations in his case against her. Observers noted the lack of balance in the trial, with CeCe’s previous conviction for writing a bad check being ruled admissible but not Dean Schmitz’s past history of domestic abuse. It was also noted that Freeman had recently dropped charges in similar cases involving self-defense.

After a lengthy period of plea-bargaining, CeCe was forced to accept a plea deal of second degree manslaughter due to negligence and has been sentenced to three years and five months in prison, essentially for defending herself in a highly threatening situation. The Sisters of Resistance blog mentions how the judge, adding insult to injury, made CeCe sit and listen while he told her that by pulling her scissors out of her purse as her attacker pursued her she was unlawfully endangering her attacker!

The online magazine ColorLines quotes a spokeswoman from the Minnesota Department of Corrections as saying that CeCe will be sent to a male prison and that the state will make its own determination of McDonald’s gender. The Transgender Law Center mentions a 2007 report which says that transgender inmates are 13 times more likely to be victims of sexual assault than non-transgender inmates. With the high level of sexual violence prevalent in the U.S. prison system, sending CeCe to a male prison is, perhaps intentionally, placing her in a very dangerous situation.

Katie Burgess of the Minneapolis-based Trans Youth Support Network is the main leader in an international support network for CeCe and is in frequent contact with her. She mentions how CeCe is in relatively good spirits, considering her situation. A ColorLines article quoted Burgess as saying that there’s no history of transgender people being placed in prisons according to their gender identity. Burgess went on to say, In my experience the committee process is remarkably abusive and just disgusting. If CeCe feels she is in an unsafe situation, there is a possibility of her moving forward with a civil suit against the Department of Corrections to be relocated to a safer facility.

It is ironic that this case occurred in Minnesota, which was the first state (and today only one of eight) to pass an anti-discrimination law specifically protecting gender identity and expression. Minneapolis was the first city in the U.S. to ban discrimination based on gender identity in 1975. Laws such as this, while an important first step, tend to be largely symbolic and do not protect trans people from public harassment, police brutality, and lack of employment opportunities.

This violence appears to be increasing thought the U.S. According to the National Coalition of Anti-Violence Programs, in 2008 reports of anti-transgender hate crimes had increased 12% over the previous year. In 2010 the NCAVP reported the second highest number of anti-LGBT murders since 1996. A 2011 article in ColorLines cites statistics indicating that the majority of anti-LGBT discrimination and violence is directed against transgender people of color.

Despite the fact that 29 states have legislation against LGBT hate crimes, with 12 states including hate crimes based on gender identity, police often provide little protection and at times even side with the attackers. In 2006 a transgender woman in New York City, Christine Sforza, was brutally beaten with a lead pipe by a manager of a McDonald’s after she had asked to use the women’s bathroom. McDonald’s employees and other customers cheered the manager on. When the police arrived, they refused to listen to Sforza’s side of the story and treated her horribly. She was charged with assault, not the manager. According to Amnesty International Sforza says the police verbally abused her, refused her access to emergency medical personal and denied her access to anti-diabetic medication she needed. This is only one case of many typifying the transphobic attitude of many police departments.

From personal experience as a trans woman, I can say there is an enormous amount of prejudice, discrimination, and abuse directed against trans people. In the Boston area, supposedly a center of tolerance, I have been assaulted on a public bus, harassed by MBTA (Boston subway) contract employees, threatened with assault several times by construction workers in Harvard Square, almost assaulted outside my then-workplace in Somerville, and received harassing phone messages from someone who illegally got my phone number from a former employer. Depending on how I looked, I have received a near constant stream of harassment and abuse in public. Unlike the nightmare CeCe has been experiencing, in my case at least the Cambridge and Somerville police have been responsive and helpful. However for a gender non-conforming person, it is very easy to imagine being confronted with the same situation as CeCe McDonald. CeCe defended herself the only way she could against a racist, transphobic assault, and her treatment is a supreme injustice. Many transgender activists think that, because she is both black and transgender, there was almost no hope for justice in CeCe’s case under the current criminal justice system.

The Support CeCe McDonald website has CeCe’s story and information on her case:
http://supportcece.wordpress.com/about-2/background/

Readers are encouraged to write CeCe as an important means of support and solidarity. It is a great morale-booster for people who have been unjustly imprisoned to receive postal mail from supporters:
http://supportcece.wordpress.com/get-involved/write-cece/

An online petition to Minnesota governor Mark Dayton protesting the treatment of CeCe and asking for a pardon:
http://www.change.org/petitions/gov-mark-dayton-pardon-cece-mcdonald

Members of Minneapolis Socialist Alternative have been working in support of CeCe throughout the case.