A few years ago I used to live in Harvard Square. Its an expensive place to live and I had a low paying job but I got a very good deal on rent. Living in Harvard

Square I was fascinated by the intersection of class, status symbols, ethnicity, and the zillion permutations of hipsterdom. Harvard Square was full of this. I wrote this after observing an interesting such example. 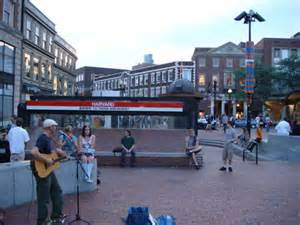 I’m a “lifestyle libertarian” in the sense that I believe that people should be able to choose any “lifestyle” they choose, so long as it does not hurt others. Some fetishes, “naturally” arising, are then hijacked by the corporate need to sell things, and hence become pathological.

Okay, enough philosophizing, Kate, this isn’t a term paper. What I’m leading up to is this; in Harvard Square, for the past  two and a half days, there was a large crowd of people, up to a thousand, camping out on the sidewalk. Some of them had tents. Many were tossing around footballs, playing boomboxes, or reading. Most seemed to be in their late teens, early 20s, a few older. They all had a tough street kid persona. They were from many backgrounds but most looked Puerto Rican (the Boston area has a small Puerto Rican community but a very large Hispanic community-most from Mexico or Central America, fewerpeople from the islands). They were a fair number of Asian kids, “chiggers”, Chinese kids from the hood. Some white kids. Mostly male, a few women.

The first day I saw this I wondered what was going on. Obviously they were camping out, waiting for something, but what? There were some, but not a lot, of sports emblems. Of these, most were for the New York Yankees. Otherwise they didn’t look like a sports crowd. Hip hop fans? They didn’t have emblems or regalia of any artists I knew of. They were definitly not a political. They were tough kids but not in any “progressive” or politically militant sense. The second day I passed them on my way to an ESL class I teach. A girl was tossing a football. It landed  in the street near me. I went to pick it up and passed it back to the girl.  I was trying to be nice. I’m transgendered. A group of tough looking dudes spotted me and began jeering. “Wot the fuk is that?” Loud laughter. I ignored them and went to my class.  This shook me up a bit. I had thought I looked really good. I took a disliking to these people after that. That was the only incident I experienced, though.

Later on the second day I was leaving the subway, called in Boston the “T”. I was surrounded by what looked like a group of kids from the sidewalk camp.There was one white kid and a group of Puerto Rican kids. The white kid was singing part of an old Rolling Stones song, “Miss You”. “We’ll get some Puerto Rican girls, have us a time, just like we used to”, as if he was baiting the guys surrounding. him.  Nobody seemed to take offense though.It was a momentary event.

Later during the second day more and more people joined the “occupation”, the sidewalk tent village. I asked a middle class looking couple what was going on. “A sneaker sale”, was the answer. Camping out for over two days to buy sneakers.People were still waiting.I mentioned how people were brainwashed by the corporate media. The people I had asked just sniffed and walked. away  It seemed like they thought it wasn’t cool to criticize something so trendy and fashionable.

The sidewalk camp continued into a third day. At the peak it seemed there were around two thousand people, all camping out. There were a few cars attached to campers, parked along the sidewalk now. They had New York plates.

I went to my bank, accross the street from the campground to withdraw money from the ATM. At that time I used Wainwright Bank. The one on Harvard Square was near cool Moroccan tea shop and the Brattle Theater. I miss both of these.The people who worked there were very friendly and I enjoyed hanging out there,both for the surroundings and the atmosphere. a sentiment I seldom feel towards banks. At the very least, as long as I had an account there I could help myself to free Keurig coffee. Being on the left politically, I did not sure their enthusiasm for “socially responsible investing” though (their ads had a recommendation from someone, who I guess was famous but I didn’t have a clue who she was, who said about Wainwright, “Socially responsibility is in their DNA”). The bank director (the bank was open Saturday), a guy whom I had a nodding acquaintance with, was talking to someone else about the sneaker campers. They were talking about them, not in a pejorative sense, but with a feeling of both understanding and amazement. I stopped to listen.

“My daughter works in Morocco,” the bank director said. “She spent two grand on shoes. It sounds like a lot but they really come in handy going to trendy restaurants and clubs.” They guy seemed to imply that the expensive footgear also helped his daughter’s career somehow. I wondered exactly what it was that his daughter did.

I went home. I told one of my roommates about Camp Sneaker Fetish. I don’t think he really believed me (He had a night job at what was basically a welfare hotel and didn’t see the surrounding area in the daytime very often).I mentioned Camp Sneaker Fetish to a few people at work, none of whom lived in Harvard Square.No one else tought it was anything out of the ordinary.

For the kids buying sneakers its obviously a “must have” status symbol, showing one’s “colors”, a form of tribal identification. There is a human need involved.Niche marketers have found a way to target this group. Naomi Klein’s book No Logo explains a lot of this.I can’t really criticize these people for much.People in a higher income bracket spend a lot of money on a car, a house, botox. I can’t criticize working class kids for doing the same thing.

At that time I needed new shoes and sandals myself. I’m not in a situation where I could easily spend much over $40 for a pair of anything. It wasn’t a high priority for me at the time.

In the early evening of the second day the shoe store, a place called “C”, either finally opened or finally got their consignment of overpriced sneakers. The long line entered the store and then finally dwindled. The sneakers, I assumed, are made in a sweatshop in Shenzhen or  Malaysia or Bangladesh for 20 cents an hour, then “resoled” for maybe several thousand times the cost of production. How’s that for exploiting surplus value. They are then bought up by kids from oppressed communities as a mark of acheiving staus and prestige.

This isn’t exactly what Marx meant by commodity fetisism, in which “commodities take on a social relationship and people take on an exchange relationship” but its close.