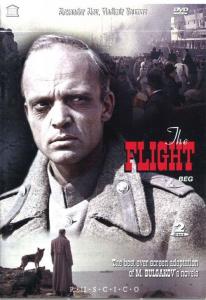 primarily his play Flight, but also his novel “The White Guard” and his

libretto “Black Sea”. The film is about a group of civilian White Russian refugees during the time

aristocrats, and middle class layers tried to take back power after the Russian Revolution. Their

defeat caused a massive emigration of the defeated Russian upper classes and nobility. This film,

while proBolshevik, sympathetically covers the inner struggles and torments of people attached to

the White cause. The Flight is essentially a psychological character portrayal.

The film is in two parts. The first part takes place in the Crimea region of Russia in winter time.

with the individuals portrayed. The second part of the film takes place in Constantinople and Paris,

amid the vast Russian down and out emigre refugee population.

Odessa. At this point in the Russian Civil War the White forces have little support though out

Russia and are clearly losing the  war. There are scenes of chaos as panic stricken refugees attempt

forms an attachment to a young woman, Serafima, after her husband, Korzuhin, an interior

minister of one of the White Russian governments,  disavows any connection with her and cruelly

abandons her at a train station in a town outside Odessa. Golubkov attempts to help her and they

fall in love. In one scene Korzuhin is revealed to be a sleazy black marketeer, attempting to

Golubkov , Serafima and other civilians, including what appears to be a traveling circus, attach

themselves to the army of the White General Khludov. Khlodov is shown as an uncaring, amoral

martinet, allowing atrocities and outrages against the civilian population. In one scene he is boldly

criticized for committing atrocities by one of his officers. In return, Khludov has the officer hung.

Soon after this, Serafima, psychologically unhinged by her husband’s abandonment and the

atrocities she witnesses, also criticizes Khludov for his brutality. She is only saved from the same

fate as the officer by her aristocratic background and connections.

In an action which sets the moral tone for the rest of the film, Khludov has a telegraph operator

whom he suspects of Bolshevik sympathies hung.

Amidst increasing chaos in Crimea and Odessa, it becomes increasingly obvious that the White

forces have lost the war. In a remarkable scene, Khludov in the vast hallway of an aristocratic

mansion, dismisses his officers, after a few of them beg him to continue the war. In this scene and

elsewhere Khludov explains that “the people are not with us”. The psychological portrayal of

Khludov is well done. It is evident he is an increasingly confused and tormented person.

was in, General Wrangel. Beyond a thin veil of politeness it is evident that Khludov despises

Wrangel for getting him involved in the Civil War. Wrangel dismisses him from the White

army.”Are you going to just turn me out like a dismissed servant?” he asks Wrangel. “That’s

exactly what I will do” replied the commander.

of the telegraph operator he had hung. He imagines he is being confronted by him at a trial in a

remote desert. Next to him in the dream is a gallows. As he travels into exile he is increasingly

close to a nervous breakdown.

Constantinople. Charmota is introduced in the opening scene of the first half of the film when he

shows up in a Russian Orthodox monastery disguised as a pregnant woman. Charmota  is

portrayed as a somewhat sly, gruff but caring figure and is the first husband of Serafima.

In the second part of the film Charmota is shown as down and out in Constantinople, surrounded

by the vast but equally down and out White Russian emigre colony. The huge Russian population

and con men. The once prominent general is now attempting to eke out a living selling trinkets to

tourists. In an early scene Charmota looses everything he owns when a cockroach race, put on by

bet what little money he had, turns into a riot.

Charmota sadly returns  to his apartment. He is living with his wife and Serafima. They are about

to get kicked out of their apartment. An argument ensues as Serafima discuses prostitution as a

prostitution. Golubkov tells Charnota that he feels that Korzuhin, now in Paris, owes a moral debt

to Serafima, whom he abandoned. In a seemingly Quixotic move they decide to go to Paris to

confront  Korzuhin, who is now living the life of a wealthy aristocrat. Charmota places Serafima in

the care of Khludov, who appears to be somewhat well off and has a relatively nice apartment in

Constantinople. In contrast to his earlier attitude during the Civil War,  Khludov genuinely appears

to care for other people and attempts to reassure Serafima. At this point however both  Khludov

and Serafima appear to be torn by moral anguish concerning their previous life. Their past world is

now gone and they do not see how they can now fit in to society.

Much of the rest of the film takes place in Paris. When Golubkov and Charmota arrive the once

elite Charmota is literally in rags. At one point he is so poor that he has to travel around Paris in

his underwear. There is a scene which is both tragic and comic in which he attempts to manipulate

a drunk beggar along a riverfront area into giving him his trousers.

and lives in a luxurious house. He appears to be something of an aesthete. He is living with a

woman who, in an analogue to Charmota’s and Korzuhin’s relationship with Serafima, also had a

and the women in their lives, are psychological opposites or “shadows” in Jungian psychology, of

At first  Korzuhin and his servant attempt to drive their two poverty stricken compatriots away.

Woman spots Charmota and talks Korzuhin into letting them stay. They play cards, reminisce, and

get very drunk. Golubkov passes out. There is a long discussion between  Korzuhin and Golubkov

his abuse of the two women he has lived with. Though an intense psychological confrontation

Charmota gets  Korzuhin to give him a large sum of money, enough for Golubkov to take care of

Initially the four of them are in anguish over what they should do next. While now financially

comfortable, they are faced with a purposeless future. Serafima and Golbkov decide they should

return to Russia, now the Soviet Union, and help contribute to the new society being created there.

Since  Khludov, is a former White general guilty of atrocities, this is not an option open for him. It

appears that participation in the new society is not an option for  Charmota, either, who appears

destined to fade into obscurity as a likeable rogue. They can only wish the young people well and

watch them off as they return to their homeland.

Russian Civil War. It shows sympathy for the situation of people attempting find meaning in a

world in which the social background which has produced them has vanished.